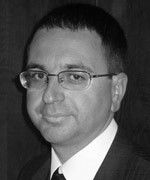 Other fields of interest are the Antitrust Law and Administrative regulation, on which he has recently published a book (Tutela della concorrenza e pubblici poteri, Giappichelli, Turin, 2007), the Judicial Review of the administrative Action (on which he has published a two volumes monograph: Il ricorso di piena giurisdizione davanti al giudice amministrativo Cedam, Padua, vol. I, 2000 – vol. II, 2001), the Discretionary Power of public Authorities (on which he has published the book La predeterminazione delle decisioni amministrative. Gradualità e trasparenza nell’esercizio del potere discrezionale, E.s.i., Neaples, 1997).

He seats in the Board of Editors of Diritto Amministrativo (Law Review), and in the Executive Committee of the Italian Association of Administrative Law Professors.

Admitted to the Rome Bar in 1993, since 2001 he has been admitted to the Special Bar of the Italian Supreme Court and to the Italian Arbitration Chamber for Public Contracts. In January 2007 he joined Clifford Chance LLP as a Partner.