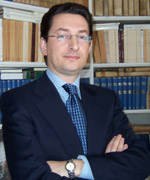 Ph.D. in Organization and functioning of public administrations (Faculty of Law, University of Rome “La Sapienza”).

Director of the Master in Administrative Sciences, University of Urbino (2003-06).

Director of the Master in Administrative Law, University of Napoli “Suor Orsola Benincasa” (2006-10).

Rapporteur in symposiums and seminars in Italy and abroad.

Author or co-author of reports for public and private institutions, including the Italian Cabinet and the Ministry of Public Function and the Cabinet of the Regione Marche.

Member of the Italian Commission for the Access to the Administrative Documents (CADA) (2002-05).

He is rapporteur at the Italian Constitutional Court (2009).

Member of the European Group of Public Law.

Member of the board of editors of Italian Journal of Public Law and Rivista trimestrale di diritto pubblico.